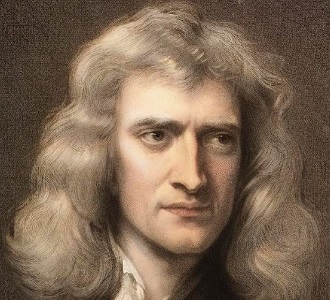 Isaac Newton was a devoted scientist, mathematician and was known during his time in the seventeenth and eighteenth century as a "natural philosopher." He spent his life studying, questioning, and discovering the universal laws that guide our existence on the planet Earth.

His particular contributions were in the fields of mathematics, optics, and gravitation. Between his reasonings and intelligence however there seemed no clear distinction between his areas of knowledge. With his discovery and explanation of many facets of natural laws, Newton created an ordered pattern for himself to fully expound upon his many questions about the universe. He was also an invaluable contributor to not only his fields of study but also to the industries and technologies in mechanics that he has helped influence to this very day.

Newton's work in the field of mathematics was seen to have been an advancement to every branch of mathematics that had been discovered during his lifetime. He was one of two, alongside the German Gottfried Willhelm Leibniz, credited with defining the foundation of calculus. Unfortunately, during his lifetime and until Leibniz died, the two mathematicians and those that followed them persisted in a jealous feud that divided the two instead of recognizing their individual contributions to the development of calculus.

Both Newton and Leibniz had different methods and notations that led to their independent discovery of calculus. It appears to some that Leibniz began to publish more evidence of his work earlier, but Newton's works that explored celestial bodies in orbit like Principia and De moto corporum in gyrum also can notice him inserting in a large amount of the language of calculus into those works. He explored calculus in reference to geometric forms and gave explanation for his use of expositions.

In relation to calculus, Newton is credited with a number of important methods, including the generalized binomial theorem, Newton's method, Newton's identities and for his classification of cubic curves or polynomial functions of three. These are only a few of the discoveries he spearheaded that contributed to modern calculus.

While Newton was exploring mathematics he also observed in great detail the science of sight and light, known as optics. While observing a prism and the way white light could be decomposed into many colors in our visible spectrum, he began to develop a theory of color. Newton tested his ideas by building the first working refracting telescope. His major conclusion from his studies was that color is a property essential and dependent upon light, and he succeeded in proving his concept that the dispersion of light from his telescope lenses would create color (or chromatic aberration).

As with all his other studies, alchemy played an important part of his discoveries in the field of optics, in this particular case Newton borrowed from corpuscular alchemy. The theory of corpuscularianism assumes that all matter is created from the composition of infinitesimal particles, it became extremely relevant in the seventeenth century.

The work with his telescope inspired Newton to publish his notes on the subject, called Of Colours. Later, Newton would expand upon his initial studies and publish his work Opticks. Newton believed and argued his point of coruscalarianism in relation to light. He drew parallels between sound waves to help explain his point. Though these contributions were valuable, modern physicists began to embrace an explanation to light that relied purely on wavelike patterns. The quantum mechanics today rely more on the modern interpretation of light than of his. Newton's 1675 work Hypothesis of Light showed his influence by the alchemist and theosophist Henry More.

Again showing his extreme sensitivity to criticism, Newton was horrified when some of his theories were questioned by Robert Hooke, a well respected fellow natural philosopher and polymath. He withdrew himself from a public discussion on his concepts which likely would have only been beneficial. Newton and Hooke had some brief interaction when Hooke was appointed to help manage correspondence between the Royal Society. Their brief communiqué prodded Newton into beginning to start working on proof of planetary orbits are a result of centripetal force. This was in essence an encouragement of his study on his law of universal gravitation.

The law of universal gravitation began with Newton's study of celestial mechanics. He referenced Kepler's laws of planetary motion and was encouraged by the correspondence with Hooke to delve deeper into astronomy. After creating a proof that a planetary orbit's elliptical form results from centripetal force that creates a proportional radius vector, Newton recorded his tract on nine sheets and the work was copied into the 1684s Royal Society's Register Book. From this short work came Newton's seminal work Principia, published in 1687.

Principia defined Newton's three universal laws of motion. It is difficult to quantify the importance and influence these laws had on classical mechanics. With the information of the relationships between objects, forces that influence them and the motion that occurs after that influence, a huge number of advancements in mechanics began. During the Industrial Revolution this fast forwarding of intellect allowed for systems and machinery that were most functional and efficient for over 200 years into the future. In our modern world Newton's foundation of mechanics continues to be a huge influence on our technologies.

Again combining his different skills as a scientist, some of Newton's concept of gravitation depended on his mathematical analysis of ratios within the universe between celestial bodies. Newton considered the Solar System in a heliocentric view. Though he acknowledged there was a deviation from the sun's location in regard to the rest of the planets in the galaxy, he called the entire summation of all the celestial bodies to be the common center of gravity.

Newton's knowledge of the alchemy was of course established within his study of the laws of the universe, but it was regarded as an "occult agency" in science which Newton strongly denied. Principia may have been Newton's highest regarded work and garnered him international admirers within the scientific community.

Newton devoted the last years of his life to a series of study on religious tracts and continuing devotion to alchemy. He was also the Master of the Mint of England for the last 30 years of his life and received a knighthood from Queen Anne in April 1705. He was only the second scientist to be knighted behind Sir Francis Bacon.

During his era and into our modern one, Isaac Newton proved his worth within the scientific community. His contributions to mathematics, universal laws of nature, and optics are unparalleled in their importance to history. Nowadays, Newton is recognized as the most famous British thinker, along with Shakespeare, Adam Smith, Charles Darwin and a few other people.